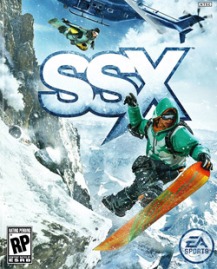 In case you were living under a rock for the past decade, and somehow missed this:

We at 2nerd1console definitely didn’t remember how awesome it was to defy gravity accompanied by some of the sweetest music we’d ever heard.

After two failed attempts to achieve the same popularity that Tricky received, EA finally released SSX. Unfortunately for EA, it hit the shelves right around the same time heavy hitters like Mass Effect 3 and Skyrim did; we understand how you might have missed it.

SSX’s mission statement is all about looking badass while you break the sound barrier on a snowboard with albeit unrealistic graphics. Although we highly doubt it was ever their intention to be realistic. SSX brings you around the globe to nine distinct mountain ranges each with its own deadly descent – think Boss fight. We started off on the Himalayas because who doesn’t want to grind down the Great Wall of China? Right off the bat we knew this game was going to be worthy of all kinds of jam sessions. The scenery is absolutely breathtaking, from the glaciers in Antarctica to the bowels of Mount Kilimanjaro; everything is rock-your-socks awesome especially because you’re blowing past doing all kinds of flips, spins and grabs.

Each range offers different play styles, keeping the game fresh and fun as you travel about the world dropping killer tricks and repeatedly destroying your body as you crash into a tree, fall into lava or plunge down a crevasse. No track is the same, and each have almost an unlimited number of routes to hit as you make your way down the mountain.

SSX uses their standard tricks progression of normal mode → Tricky→ ÜBERTRICKY. The fun begins when you hit Über tricky (as if you havn’t been having fun already). All of a sudden you’re able to use the Force and make your board spin on its own whilst simultaneous flipping off a massive jump. Yes, evidently the hardcore snowboarders have a high midichlorian count, who knew?

As you play more, your character levels up and you can purchase better items through the store. This is where the game is a wee bit shaky. It took us, experienced gaming nerds, a bit to figure out how exactly one buys items and why they are so damn expensive. This being said, the ability to purchase oxygen tanks, wing suits, pulse goggles and armor makes the game as awesome as it sounds. Each of these different items is not only a fun element, but a necessary one to complete the different deadly peaks. The difficulty in this game comes with the various elements one has to face as your attempting to do 14 rotations in a single trick while managing your oxygen tank and solar pack. Complicated. These include freezing your balls off and dying in Antarctica, Complete darkness as you navigate Mt. Kilimanjaro and trying not to eat it and plunge into pits of lava; and my personal favorite flying over massive gaps and along cliff faces in Patagonia with your squirrel suit. All of these add new elements to your classic ‘ride down the mountain and do tricks’ aspect of SSX’s predecessors.

SSX features a Campaign mode that revolves around beating the bad guy Griff to the best jumps around the globe. Each mountain has a unique rider to unlock who considers themselves masters of that slope. The campaign is geared to educating the player on what devious obstacle you’ll have to look out for. Each mountain range has its own intro video that displays the massive gaps and weather with huge skulls and crossed bones in order to get the player to respect the drops. If you’re looking for in –depth character development, you should probably look elsewhere.

Tearing the slopes a new one wouldn’t be the same without the bass-ridden soundtrack that accompanies it. When you’re about to jump out of the helicopter and you hear your favorite tune come on, you know you’re going to have a good run (and if you mess it up, that much more aggravating). The game seamlessly remixes the song that’s playing when you hit huge air in trick mode, or freezing in survival, plummeting down the mountain in race mode, and a screeching halt on a wipeout. Whatever the tune, when you hit a big enough multiplier and reach Über Tricky mode, the song is replaced by Pretty Light’s remix of the iconic DMC Tricky beats. At this point, if you aren’t on the edge of your seat and pumped as you defy logic and physics while listening to some wub wubs you’re unfortunately deaf.

What revolutionized the game for us what the ability to incorporate your own tracks into the set list. Once you grow bored of their music they suggest you build your own playlist. AND they remix the music like we’ve already discussed. Like classical music as you make the slopes explode? Why not Skrillex and some hardcore dubstep? Do what you want. The game makes it really easy to build a playlist for each type of descent; allowing you to categorize the bassiest tracks you have for the most challenging avalanche runs etc etc…

We were actually surprised at the quality of  graphics. The glare from the sun, the shadows across the snow and extent of detail put into the trees are all highly indicative of a job well done. The descent through Kilimanjaro is the best example of this.

Smooth, simple and intuitive controls allow for the players to enjoy themselves thoroughly. The whole point is to have fun and a glitch free environment has you throwing the control at wiping out, and not because the game spazzed.

Solely there to teach you how to play the game. Nonexistent really.

The sound makes the game. Whether you enjoy their own soundtrack or not, you are given the option to completely overhaul it and replace it with your own.

100% completion is extremely difficult. Aside from that shiny achievement though, picking up that controller without any training is still easy and rewarding.

SSX makes quantum leaps ahead of its predecessors by sparing us triangular boobs and square afros to produce a jaw dropping high definition game where the whole point is to shred snow and look ridiculous while doing it. Now that you (we hope) finished Skyrim and struggle to justify staying indoors, we highly recommend you spend a whopping 11 pounds on this gem.

Just incase you want to see what it means to have absolutely no life – here is the highest score I have ever seen:

We are two third year students at the University of St Andrews who play (probably too many) video games. We decided that since we cycle through so many games a semester, we may as well start writing about them! We will be reviewing mostly free-to-play/ games we find on sale, unless there is a massive release and we scrape the cash together to pick it up.
View all posts by 2nerds1console →

All these thoughts...in my head! I need to get them out! Cancel reply

Feel free to email us at: